← more from
darkTunes
Get fresh music recommendations delivered to your inbox every Friday.
We've updated our Terms of Use. You can review the changes here. 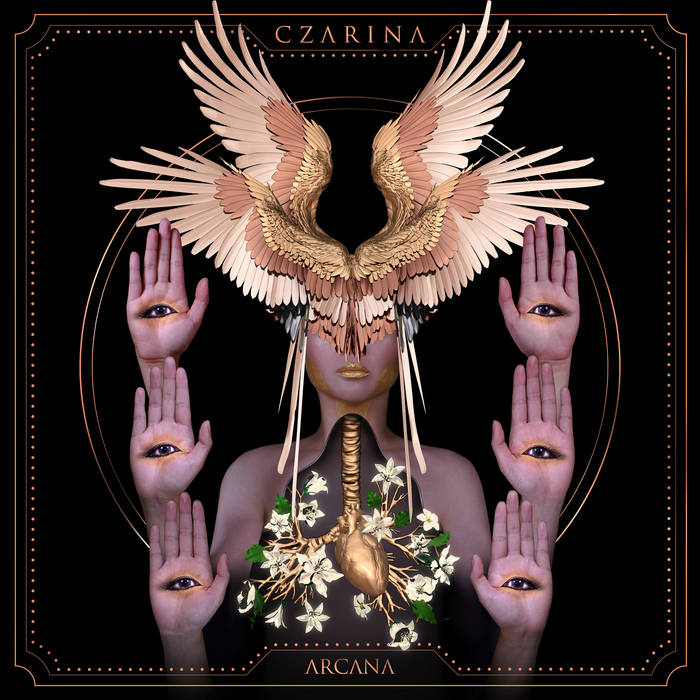 nate_beta definitely an album I keep coming back to, I like how the songs feel deep and interesting from all the instruments to the vocals.

Nick Greenleaf Mournful yet triumphant, ecstatic yet striving. All around brilliant. Been playing this a bunch since it dropped. I can’t remember the last time a new release hooked me like this. Favorite track: Celestial Satellites.

szymonc The music, the artwork - beautiful 🤎🪐
There is something so magically captivating in the music here that I can't even find words to describe it. The ancient and the modern mix together in a perfect harmony. Hypnotic and blissful. Favorite track: Atomic: Ad Initivm.
more...

Lost In The Tunes

Galicia, Spain-based New York native and dark electro artist, CZARINA (styled as C Z A R I N A on all platforms) unveils most awaited sophomore LP, Arcana, under German gothic label darkTunes Music Group. Cosmic, mystical, yet also feral and ferocious in nature, Arcana (meaning “mysteries” or “secrets” in Latin) is a celebration of epic proportions of nature, life, love, wisdom, faith, survival, consciousness, truth, the laws of the universe, and one’s own completion. The record showcases the vast dynamics and full range of CZARINA’s songwriting, composition, production, and artful lyricism, and has been meticulously crafted to mirror and articulate the mysterious depths and facets of the artist’s mind and spirit.

Each track in Arcana harnesses an eclectic mix of dark electro, synthpop, orchestral baroque pop, gothic new age, and progressive rock into one, cohesive and thoughtfully designed sonic signature that is both ethereal and heavy-hitting, and has become CZARINA’s very own hallmark sound. The album embraces mysticism and starts with the progressive rock and new age number “Celestial Satellites” - a ritualistic call on all forces of nature and the cosmos, featuring thunderous drums, a medley of tribalistic gothic chants and arpeggiated guitars against a backdrop of symphonic synths which all create the marquee soundscape throughout the record. Her critically-acclaimed, chamber-infused synthpop single, “Wonderland,” follows as a special ode to her newly adopted home in Galicia, which she refers to as her “sacred wonder” and sanctuary of magic and mysteries. The electrically-charged industrial, gothic club hit "Atomic: Ad Initivm” surges in like a nuclear dynamite, followed by the monstrous art rock number “Excelsior” which takes listeners to new heights with tantric polyrhythms, odd meters and eclectic vocal, guitar and drum performances by the artist rendered into one continuous, giant crescendo crashing wave upon wave. CZARINA takes audiences further into a world of magic and spirit with the delicate Winter Solstice offering, “The Fox’s Wedding” — an organic and symphonic orchestration of wondrous love and spiritual union only the universe could conspire to design as inspired by East Asian folklore the track was named after. Then Arcana takes a very mysterious turn with the baroque and chamber electro “Medusa” - a dark incantation inspired by the famous Greek myth that calls for all hidden truths to be unveiled. CZARINA pays homage to gothic icon Siouxie Sioux and covers the dark, apocalyptic vision in “Cities In Dust” with cinematic orchestral arrangements, giving the darkwave classic her own signature imprint. The record reaches its summit and enters post-apocalyptic realms with “Lost Lands.” Inspired by Denis Villeneuve’s Dune remake, “Lost Lands” rumbles in its thunderous, progressive metal treatment, cinematic soundscapes, and valiant lyricism that harkens bravery in the face of calamity. The record finishes off in a cosmic trance with a final journey to outer space in “Til The Last Star: Cosmos” - a sentimental, spacewave pop ballad about traversing the ends of the universe for a chance for true love.

All songs in Arcana were written, composed, arranged, performed, recorded and produced by CZARINA in her home in Galicia, except for “Cities In Dust” which was originally written by Siouxie Sioux, Budgie and Steven Severin. Von Hertzog (VHxRR, Information Society) of The Social Club (Reading, PA) served as Co-Producer, Mixing, and Mastering Engineer, providing additional production input and final touches to finesse the large dynamics of CZARINA’s new sound. The album art and all visuals were created by DeadlyKawaii and CZARINA together.

Arcana is available as a special Limited Deluxe Edition Compact Disc featuring all 9 tracks on Bandcamp and darkMerch.com, plus a bonus instrumental track of “Lost Lands.” The digital release and is available for download and streaming on all platforms. In celebration, the record release is accompanied by a special limited distribution of CZARINA’s very own branded Smoked Black Rosé Cider also called ARCANA, handcrafted and distributed by Skald Cellars (PA) in the US only. The record will also be followed up with a series of new music videos which will be released throughout the year under darkTunes Music Group.

Original Composition, Lyrics, Arrangements, Performances, and Production on all Music by CZARINA
Except "Cities In Dust" - Original Song Written by Siouxie Sioux, Budgie, and Steven Severin.
Recorded in Galicia, Spain.

Co-Production, Mixing, and Mastering by Von Hertzog at The Social Club (Reading, PA)

CZARINA (styled as C Z A R I N A) is an American award-winning synth and electronic artist, songwriter, producer, visual artist and filmmaker. A New York City native based in both Galicia and London, her work transcends a vast spectrum of electronic genres including Dark Electro, Gothic New Age, Progressive Rock, Industrial, Synthpop and Post-Metal. ... more

Bandcamp Daily  your guide to the world of Bandcamp